Many people have various opinions about what good fiction should look like, but almost anyone could agree that there are certain elements that should be an integral part of fiction. Plot, characterization, and the setting are three basic components of all novels, plays, and movies. But how exactly do these components make a good story?
All stories have plots. A good plot has a clearly defined conflict between the protagonists and the antagonists. The war between the Scottish and the English, as seen in the movie Braveheart, is a clear example of a real conflict between good protagonists and bad antagonists. William Wallace did not merely have an emotional or verbal conflict with his enemies. Armed with his massive claymore, Wallace hacked through his foes, fighting against overwhelming odds.
Conflict can also involve a more subtle form, such as the tension between the opposing sides in a court of law. Whether the main character is battling his enemies with a sword or arguing verbally with his opponent, the tension and conflict should increase progressively as the plot moves forward and eventually come to a head, the climax, where tension and conflict are at the maximum.
At this point, prior to the resolution of the conflict, the main characters are close to losing the battle or conflict. Here, the reader, or viewer of the story, should get the strong feeling that the hero just might end up losing to his foes. If it appears that the main character always has the upper hand and does not have a chance of losing, the outcome will be obvious and the reader may find it hard to keep reading. For example, if super heroes never had imposing enemies that presented real challenges for them, they would have very few fans. Stories with good plots and interesting characters will hold the reader’s attention up to the time of the climax.
A good plot can only exist if the characters are well formed and realistic. Stories with poorly developed characters do not hold the reader’s attention for long because they seem fake and two-dimensional. A character is really an imaginary person that exists in the author’s mind. If the author fails to imagine and create realistic characters, his story will lack a dynamic and believable element that is crucial for it to be interesting. A character can make or break a story. Good characters stand out in a reader’s mind. They appear almost as realistic and believable as a person one is acquainted with, such as a coworker, a boss, or a friend. Being realistic, they shouldn’t appear to have been created on an assembly line. Each character should be different from any other that existed. Unique features set good characters apart from the thousands of personas that exist in movies and books. Features such as a scar on the cheek, walking with a limp, having a unique way of speaking, or a distinct personality help to give characters a life-like feel. An assassin with beak-like nose, a detective with beady eyes that can pierce like lasers, or a scientist with a nervous habit of rubbing his hands together all stand out and will likely be remembered by the reader of good fiction.
And finally, a story can only be good if it has a distinct, detailed, and realistic setting (or settings) that makes the reader feel as if he or she is present in the story. If the story takes place in the 1800s, in the city of London, the descriptions of the period, the clothing styles, the streets, the buildings, the rooms, the bridges, and the people should be accurate and vivid. The reader should be able to visit the streets of London and almost see the surroundings in his or her mind’s eye. ‘Cobblestone streets worn smooth like polished wood by the countless numbers of feet that have trodden them underfoot’, ‘quaint shop signs once brightly painted but now exfoliating their decaying coatings like lizards shedding scales’, and ‘a horse-drawn coach, its wheels protesting with loud squeaks, rushed past’ all are descriptions that help to make the settings come alive in the reader’s mind.
However, a huge amount of unnecessary details do nothing to create interest in the story or in the plot. Rather, they slow down the pacing of the story and tend to make the story uninteresting. Pacing is everything in novels and movies. If the story is interesting and the conflict and tension are increasing in intensity, a long, slow, relatively uneventful spot in the middle of the story will cause many readers to stop reading, or to read less and less each time they pick up the book. From beginning to end, the story needs to be interesting, and the pacing, though somewhat varied, should not leave room for boredom. A reader of a good fiction story will be reluctant to put the book down and will have a lingering curiosity about what will happen next.
In conclusion, fiction has three main elements: a plot, characters, and a setting (or several). A good plot is interesting and unpredictable with a real conflict that culminates in a climax. A plot can only be good if the characters performing the action and involved in the conflict are realistic, unique, and believable. The setting (or settings), where the characters interact, must be a place (or places) that the reader can easily imagine and picture vividly in his or her mind. Details should make the story come alive, without bogging down the pacing. Those three elements together constitute a good story.
at September 26, 2011 No comments:

Science fiction is a subject that will never grow old. One might argue that for thousands of years science fiction has been the product of many creative imaginations. The Epic of Gilgamesh, the Mahabharata, Homer's Odyssey, and many other ancient stories contain similar themes and elements to stories written today. Elements such as romance, drama, action, and adventure have always appealed to humankind. Every epic story has villains and heroes, daring rescues, battles, and romance.
Why is that the case? Why are the best movies made always about a hero falling in love with a beautiful woman and fighting in a climatic battle for a noble cause? There is something within each of us that finds these stories captivating. Regardless of culture or creed, we all enjoy movies or novels about heroism, betrayal, sacrifice, and victory. Why is this? 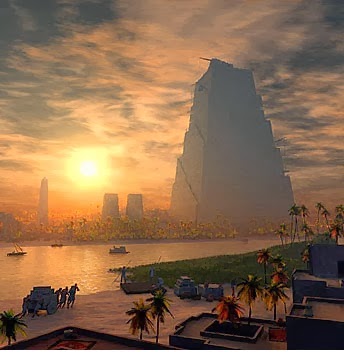